Moving towards the future of regenerative medicine

What is KINTARO Cells®?

Our company develops and manufactures “KINTARO Cells®” which is a stem cell that has the potential to be used to treat and prevent diseases, medical anti-aging, recovery after surgery and more. Stem cells have a long history to it, where over 50 years of research and development in Russia and over 7000 treatments have been undertaken. In addition, many treatments have been accomplished overseas. Currently we are expanding our research and development and manufacturing under the brand “KINTARO Cells®” where our products are cultured using Japan’s advanced culture technology and patent manufacturing. Only 1 in 100,000 cells in bone marrow fluid are discovered and extracted making mesenchymal stem cells derived from bone marrow quite rare. These cells are extracted by using advanced biotechnology and successful proliferation by patent culture technology. This describes our multipotent stem cells “KINTARO Cells®“.

The highest number of bone marrow mesenchymal stem cells contains in the human body at moment of birth. However, the number decreases with age, decreasing from 100% at birth to 10% during teenage years, 4% during a person’s 30s, 2.5% during a person’s 50s and 0.5% during a person’s 80s. “KINTARO Cells®” is a multipotent stem cell that has the effect of supplementing stem cells in the aging body and regenerates cells and organs.
“KINTARO Cells®“are obtained and cultured from young, healthy donors in their 20s. In addition, “KINTARO Cells®” has CD34- marker that eliminates risks of transferring any disease from a donor. The culture fluid that is approved by the American Food and Drug Administration (FDA) Good Manufacturing Practice. Thus, exhibiting that cultivation is carried out in a process conforming to international standards of practice.

The three effects of “KINTARO Cells®”

When inflammation or damage occurs in the body, a signal is transmitted to inform the “KINTARO Cells®“. After receiving the signal, the cell will head for the affected part of the body.
In a case of tissue damage, the MSCs located in immediate vicinity or originated from bone marrow begin to migrate to the site of injury.
Migration process is represented by several distinctive steps and starts with the resistance and adhesive interactions between cells flowing through the bloodstream and vascular endothelium.
Homing receptors expressed on circulating cells interact with corresponding co-receptors. Their interaction leads to the connection of circulating cells to the endothelium and induces rolling effect on the cell surface.
Another factor involved in the forming process is fibronectin (FN), which binds to the ECN components such as collagen, fibrin, and heparan sulfate. These interactions play a fundamental role within the processes of cell adhesion, growth, migration, differentiation, and wound healing.
Basic fibroblast growth factor (bFGF) and MMPs are other factors that can modulate MSCs homing.

“KINTARO Cells®” will differentiate and go into the tissue of the original stem cell hence necessary parts need absorb it.
Additionally, aside the immunomodulatory actions, MSCs also contribute to reparation and regeneration of damaged tissue with their differentiation potential.
MSCs secrete a wide variety of different growth factor, cytokines, and adhesion molecules by which they affect the microenvironment of the inflamed and degenerating target tissue and thus maintain positive effect on the tissue repair.

“KINTARO Cells®” creates various proteins and delivers necessary factors to cells in the body. This is the effect of regenerating damaged and weakened cells.

The six functions of paracrine mechanism

※As for the nano-level analysis, it is currently being researched by researchers internationally. 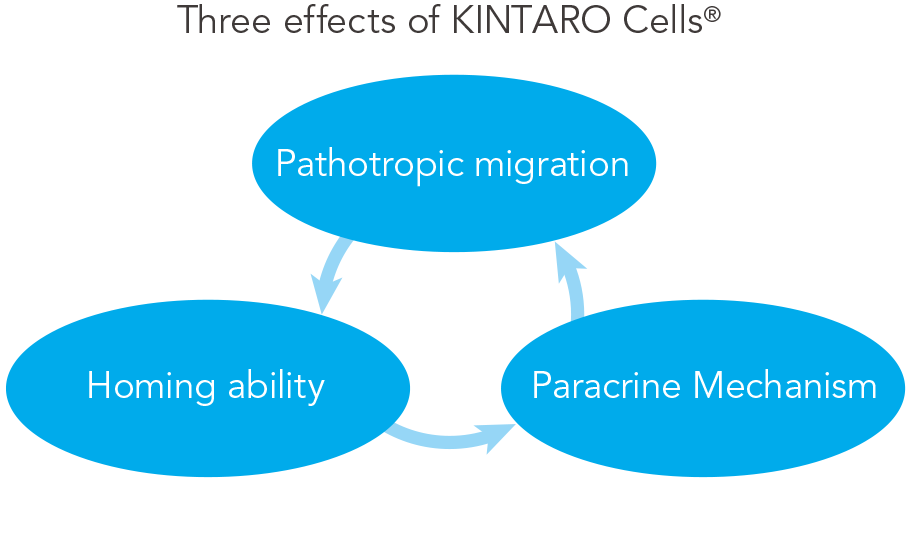